The TGV from Frankfurt to Avignon has two levels. The view from the window on the lower level is filtered through a net of dust on the windows. I take a seat in the carefully booked reality. All the tickets and apps are waiting in my smartphone, since the day before yesterday I’ve been getting reminders of which booking is now imminent or urgent. I researched extensively, studied connections, weighed up the pros and cons of routes. In an interview I finally read the recommendation to travel from Germany to Madrid via Avignon. All the other suggestions sent me via Paris and ended in Barcelona at 8pm, in a succession of different train companies and corresponding numbers of tickets, but with no guarantee that the trains would wait for each other in case of delays and that tickets would remain valid. France and Spain have different gauges with interchange stations on the Mediterranean or Atlantic, about 10 minutes apart by train. Hendaye – Irun and Cerbere – Portbu. In the Katapult magazine I discover a graphic with the European gauges and the explanation that they were created for military strategic reasons. These borders also complicate any search for train connections via app. If I want to travel from Bilbao to Paris, for example, it suggests that I use a 20-hour connection via Barcelona. Instead of about 2 hours Bilbao – Irun, a few minutes from Irun to Hendaye and then 4:40 to Paris.

Rail companies advertise the reactivation of long-distance and night trains, and this is exactly the recommendation an acquaintance gives me. “Why don’t you take the night train from Switzerland to Malaga? I did that once.” We laugh as we realise that this was probably as long ago as my 3000 km and 50 hour trip with the Hellas Express from Dortmund to Thessaloniki. In a couchette car that had been converted into a 6-seater compartment during the day. I remember that the backpacks were stowed on shelves high up in the corridor. There we smoked at the open window on the way through Yugoslavia and made coffee on a camping cooker with a gas cartridge. Especially on the way back from Thessaloniki to Dortmund, we formed a community in the compartment. Not only the opening and closing of the windows was negotiated amicably, but also the time when we went to sleep and especially the common meal. Everyone opened their bags and shared homemade delicacies. Pita pockets filled with sheep’s cheese or spinach, roasted chicken, juicy tomatoes from the garden, olives, melon and sweet cake. The Hellas Express is history, as is the dark blue Zurich-Malaga night train. Somewhere I read – I can’t remember where – that there is no interest in revitalising such routes, so as not to give fleeing people an easy way to Central Europe.

The TGV races from Strasbourg to Mulhouse at 297 km/hour. We cross Europe on separate tracks without changing trains at a border and I don’t form a community with my neighbour. She is absorbed in chats. Suddenly the train stops, the doors open, everyone is allowed to walk on a narrow Sathonay-Rillieux platform and walk the dogs. My neighbour begins to speak. People settle down on the platform with books. One girl is wearing a T-shirt with the words “Kindness – A quality of being friendly, generous and considerate to others.” The mood is quite relaxed and beautiful, the full moon already visible in the sky. We are going to have a long delay, an ‘abandoned’ suitcase has been found somewhere.

The biggest knot in the head for me on this trip was Avignon. The accommodation was prohibitively high, with luck I found an affordable private room – but with a complicated route to the TGV station, which is outside the centre of the city. I set up the Uber app as a precaution. So far I had rejected Uber, not really informed, with a vague reservation about whether using it was politically correct – or not?

On the platform, illuminated by the full moon, I start chatting with my landlady Florence, who is wonderfully obliging, even adjusting to a very late arrival. “We’re not at the age of eating watermelon on the steps of train stations or waiting somewhere for nights until the next train leaves,” my friend said before I left for this trip.

So at 11 o’clock at night, I find myself at the TGV station in Avignon, which looks more like a futuristic airport. Stepping out of the station, I am surrounded by the scent of dryness and conifers. The night is warm. I cross a park, large wrought-iron gates border the street, cars glide silently past me while I chat with Florence in two apps simultaneously and watch Manuel’s car approaching on the city map. I already know that Manuel speaks English. Florence’s answers are automatically translated in the app. Everything feels very surreal. In between, I look up, see the high gate that surely closes off the station at night. Nobody eats watermelons here anymore. A few minutes later I’m gliding myself in one of those noiseless cars and after a warm welcome I reach a flat with a view of the night sky. The beautiful scent is everywhere in the city.

“Je suis la!” Gregory is at the door. “I need your help” I type into the app “I can’t get out of the fence.” Gregory sees me, waves and signals it’s not his problem. I am trapped behind a 2m high fence and feel like a chicken running up and down. All the switches I pull remain without reaction. It is soon enough that the rubbish driver is on his way and activates the neighbour from above. The big green gate moves aside and I remember Florence using the word ‘Securité’ several times last night. Now I see the walls, fences and gates everywhere. A few minutes later we pass through the wrought-iron gate at the station. Check-in by scan, comfort check-in on the train. And then just 7 effortless hours through the countryside of southern France and Spain, vineyards, textile industry and open space outside the window, to Madrid Porte d’Atocha.

I notice my age in this record, of course, and my privileges. No one drives through Yugoslavia smoking any more and only with access to all the digital barriers am I in Madrid within just under 26 hours with 2 x 7 hour journeys.

By the way, turtles live in Atocha station. In the palm garden of the historic arrivals hall, Madrileneans put their pets out. From the station, it’s a half-hour walk along the Botanical Gardens and the Prado to the Fundación Mapfre. There, the works of Pérez Sequier are currently on display. He observed the arrival of tourists in 1960s Spain in his series ‘La Playa’. Manuel Fraga, minister under Franco, brought about an opening for tourists and thereby changed the tone of the dictatorship. The first holidaymakers were segregated as much as possible, as if in a kind of artificially decorated world. And yet the Spanish met them. 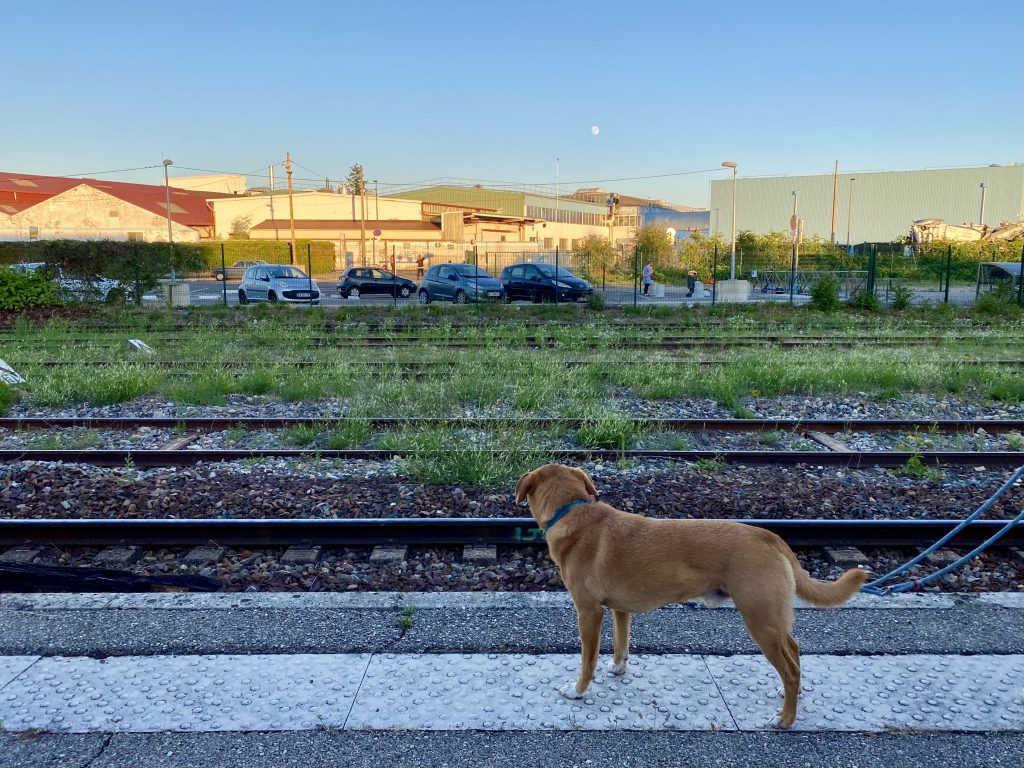 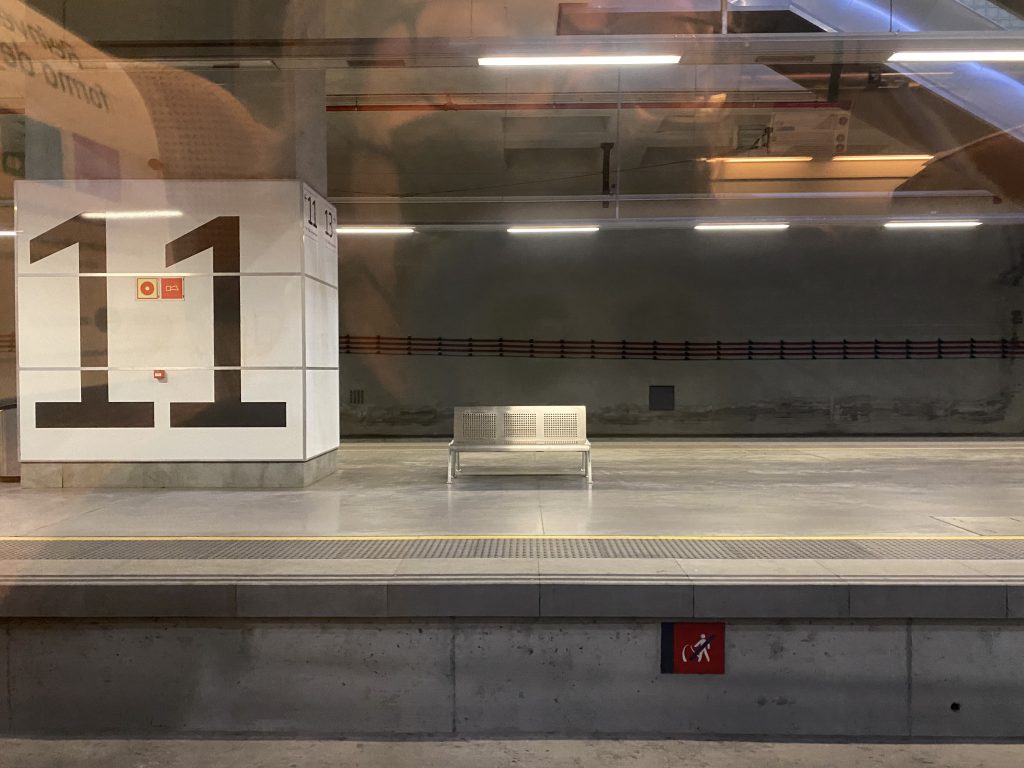