At the airport’s passport checkpoint there are flowery stickers and handwritten notes next to the official signs. On the train from the airport to the city, we get a pretty little pink slip for a ticket made from sturdy paper with a lot of characters printed on it. The woman at the counter arranges my change neatly on a small tray. The train is full of support handles the sheer number of which makes me guess just how many people can go together in one train.

Tokyo is many Tokyos. In this giant city, I can dive into different worlds with an amazing speed of change. I can feel the change in my whole body, even in the way I hold my camera. In the smaller byways, I pick up perception after perception. I can feel myself getting lost in overwhelming places. My perception starts slipping, and I try to grab onto old assumptions like “This is what Japan is like”. People with face masks that confuse me. People with smartphones everywhere. Gatherings on WiFi hotspots. In order to avoid clichés like that and to find back to my own perception, I need a break. A very physical one: sit, rest, drink something. I now can feel, what is happening inside. And I can calm down. A fresh and direct way of seeing becomes possible again.

An overcrowded subway train, yet hardly a sound. The young woman next to me is watching a video, some online tutorial on how to braid her hair. Meanwhile, she lets out a very noisy sniffle. What a contrast for my European ears! It sounds ill-matched, and I like my own confusion. It makes me watch more sharply. From the masses of businessmen in gray and black, one breaks away to help us buy a ticket for the express train at the ticket machine. The machine cancels the process at least four times, because we are too slow in choosing our answers. Patiently and affably to the core, our helper logs into the menu again from the start. Our request has become his request. The day before we bought tickets ourselves, and it was only on our way back that we noticed the huge queue of waiting people that had built up behind us. Nobody had urged or pushed us. I encounter this kind of friendliness every day, and it really touches me.

In spite of the clouds, the light is intense. The city is fashionable and perfect, just as it is random and modest. There are quarters with small wooden huts and adventurous steel constructions that surprise me. Residential districts where everything looks self-made next to shopping malls and concrete skyscrapers. Air conditioning and electric installations on house fronts. Forms, lines, and colors nesting endlessly upon each other. The city does not feel cramped at all. There are few cars parked at the curb. They are stowed away in car parks under and above ground . Traffic is gliding quietly. Everything is well-ordered and clean. Not a trace of cigarette butts or chewing gum anywhere.

In a park near the river, a little turtle is crossing my way. An old man gingerly carries it back to its pond. We are all having fun together. I feel how the wealth of impressions makes me deeply happy. We are coming to the old part of town. I see geikos and men in traditional clothing and homeless people. Cherry blossoms made from plastic serve as background in selfies for tourists who arrived too late. Cookies and dumplings made from dark bean pastry are offered in various flavors from countless stalls. I cast a kind of I Ching in front of a temple and stand in line for a quick offering. I smile with people whose language I don’t understand – and who don’t understand mine.

* a restaurant that has us sit on the floor and stir stuff on hotplates into pancakes, while the air conditioning blows ice cold whiffs on the back of our necks
* carrying luggage up the stairs, suitcase in front of me, at rush hour to the subway train and hearing the conductor apologize at the track that he had to let the train leave, eagerly pointing out that the next one will arrive shortly
* Madame Ogura bowing down repeatedly as we are leaving
* having lunch at the cosmetics department of a natural supplies store
* an abundance of impressions at the luxury shopping mile and in the neighboring manga and anime quarter that almost has me put down my camera feeling so overwhelmed
* sensing true delight and affability at the stationery store Kakimori and exchanging stories about the salesclerk’s childhood years in Düsseldorf-Oberkassel
* an enchanting walk through a district full of temples 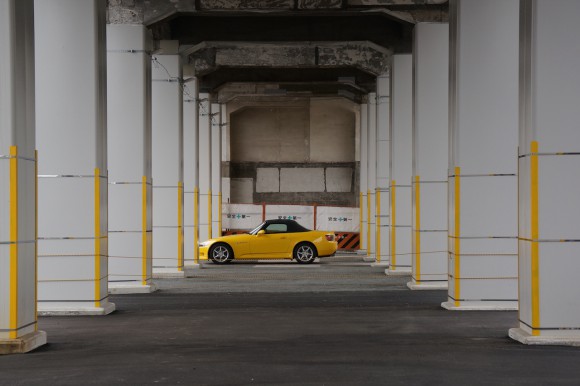